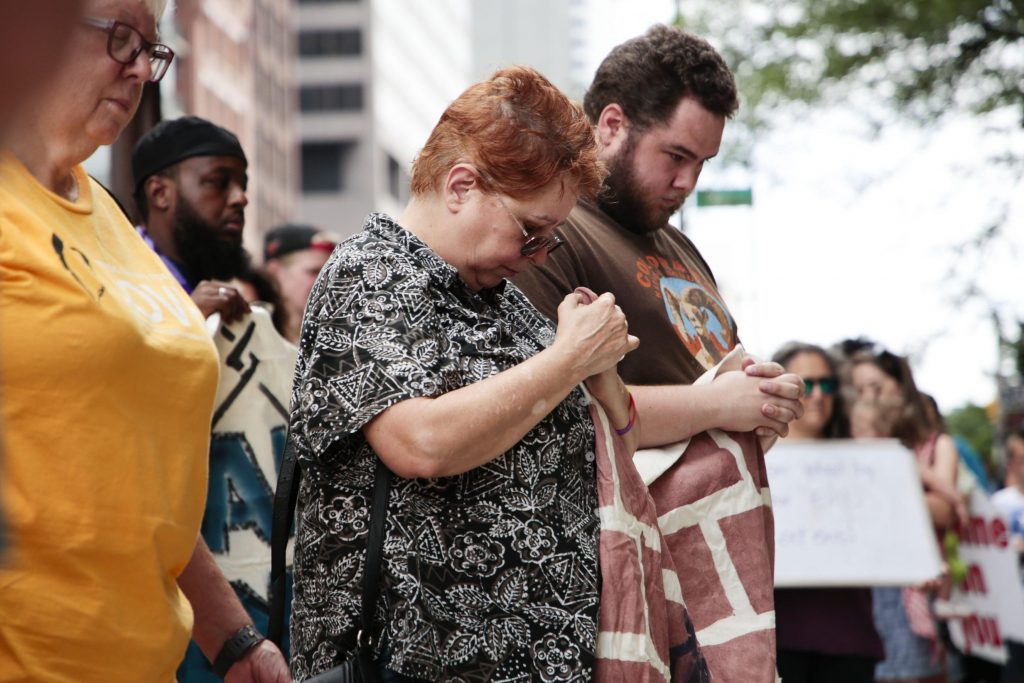 “We’re going to have a lot of happy people,” Trump said, while arguing prior administrations had seen similar scenes of distressed children being taken from their parents.

But Rep. Joyce Beatty, D–Jefferson Township, said Trump “has no one to blame but himself” for the outcry, which she called “one of the lowest points in his already tumultuous presidency.”

“Trump’s decision to end his policy separating migrant children from their parents is not one based on ‘compassion,’ because if it were, he would have never instituted his immoral policy in the first place,” she said, adding that his “abrupt reversal is out of political necessity.”

The executive order comes as Congress continues to wrestle over how to solve an immigration system that all sides agree is broken. Hardline Republicans and Trump have called for a wall on the southern border, while Democrats have largely focused on how to reverse a Trump decision to allow the deportation of people brought to the U.S. illegally as children.

But the family separation policy — which Trump and his administration spent days defending — pushed the debate to a boiling point, spurring lawmakers to trip over themselves insisting they did not favor separating parents and children.

Eulalia Pedro Gaspar, 29, formerly of Marion and now living in Seattle, has been working with Columbus attorney Jessica Rodriguez Bell since May 17 to get her six-year-old niece safely into her custody.

Her niece, Juana Pedro Diego, was separated from her father, Juan Pedro Gaspar, after they entered the country in Arizona on May 14, said Eulalia Pedro Gaspar, who fled her home in Guatemala in 2014 under threats of gang violence. Juan Pedro Gaspar was taken into the custody of the U.S. marshals and is being detained in Atlanta charged with criminal entry. Juana was taken to a shelter in New York.

Eulalia Pedro Gaspar spent weeks trying to find her niece and, once she found out where she was last week, trying to get her home. Now, she’s trying to get custody of her even as she waits for her own asylum case to go through Cleveland’s immigration court. The date for her hearing was recently postponed by the court from April 26 to December 2019, Rodriguez Bell said.

Her niece’s fate is very much on her mind. “I don’t know anything and it’s just heartbreaking,” said Eulalia Pedro Gaspar, speaking in Spanish through a translator. “I’m worried about her.” Her niece, she said, “cries every time we talk. She’s sad and lonely and she wants to go back to her father or me.”

Sen. Rob Portman, R–Ohio, late Wednesday announced he and 26 other senators had introduced a bill that requires that children and their parents remain together during their legal proceedings related to immigration violations. He said while he was “pleased” the administration had agreed to keep families apprehended at the border together, “the reality, however, is that this executive order may be subject to litigation almost immediately and that’s why Congress needs to enact a legislative solution.”

Portman’s bill would help expedite the cases of families in detention and increase the number of immigration judges and resources to make it possible to expedite such cases.

Sen. Sherrod Brown, D-Ohio, who has signed onto a Democratic bill preventing families from being separated, wrote to the secretaries of Health and Human Services and Homeland Security on Wednesday asking the departments to outline what they were doing to care for the physical, mental and emotional well-being of children separated from their parents. Brown said he was alarmed by reports that in at least one facility housing children, staff felt they were barred from physically comforting children separated from their parents.

He said Congress needs a “bipartisan solution that recognizes that we’re not going to deport the 13 million people who are here already,” he said. “This policy of separating children is immoral and un-American and it’s shameful.”

In Ohio, meanwhile, Attorney General Mike DeWine said children of undocumented immigrants apprehended along the border should not be separated from their parents, but declined to expand on his position when questioned by reporters at a news conference on Wednesday morning before Trump’s about-face.

“Laws need to be followed. However, this great country should not be in a position of separating children from parents,” the Republican gubernatorial candidate said. Asked if he was calling on Trump to reverse his administration’s controversial policy, DeWine replied: “I gave you my statement.”

This article was originally published by the Columbus Dispatch on June 20, 2018